Posted on November 27, 2014 by lockdownpublishing

As a former inmate who spent over 10 years inside some of the most violent California prisons on drug charges, I took on D.J.’s book to read and review. As an author myself who started writing to shed some light into the darkness that is California’s out of control prison system, my curiosity to see a Former Prison Guard’s perception was peaked.

It is a penetrating look and historic book that should be required reading in colleges in regards to Crime and Punishment, Criminology, Gangs and Prison culture. It is also an intense read and highly entertaining.

The Story follows D.J. Vodicka into the prison system as a guard and in his own words, a new “Fish”, as he made his way adapting to one of the highest security prisons in the state, Corcoran. From there he went to the notorious Pelican Bay State Prison. D.J. rose to the challenge and had a mentor, Mr. Reynoso, who helped him. At Pelican Bay D.J. was a first responder to a Mexican Mafia hit where a drop out (Informant against the mob) got a piece of steel in his neck and later died. D.J. witnessed other intense riots, stabbings and constant violence, and maintained his dignity and honor throughout. 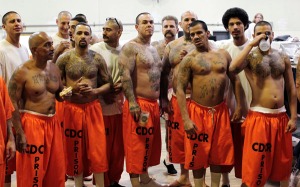 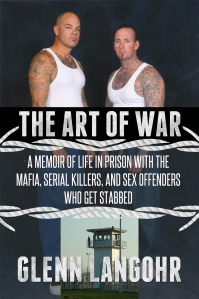 Once transferred to Salinas Valley State Prison, next to Soledad, D.J. was a veteran prison guard who had worked the highest levels of security and should have had a position of leadership. Instead, the new prison seemed to have a collection of non veteran prison guards who were easily influenced by the violence and heavy gang life of lifers on the yard. A riot exploded. But this one was against the prison guards over a beef that might have been from excessive force, or just a gang flexing muscle. The Mexicans attacked the guards and D.J. was there to help investigate the incident. At this point in the story, D.J. stands up and maintains his integrity by writing accurate reports and taking pictures of injured inmates. The guards seemed to emulate the gangs and create one of their own that went by G.W. They started acting like gang bangers and flashed sign language just like the gang banger prisoners the guards were in charge of securing. D.J. reported it when asked to.

At that point, the prison guards who had clicked up in this Green Wall subculture/gang created a “Code of Silence” to look the other way when it came to violence and intimidation manuavers against the inmates. This gained momentum and became more criminal in regards to falsifying reports, planting weapons and possibly/allegedly more of the same or worse. And standing in the way of this tsunami was D.J. Vodicka. Who continued to maintain his ethics and accurately report and follow instructions against this building subculture amongst the guards at Salinas Valley. Now, from the highest levels, D.J.’s reports were leaked on purpose and he became an absolute target. He continued to stand tall all the way to the end. Read this book to understand just how far this went.

My takeaways as a former inmate. While locked up at Chino Central in the notorious Sycamore Hall, nicknamed “Stick-A-More Hall” for all the stabbings, a prison guard brought an Aryan Brotherhood drawing “Calling Card” that was an image of dice,a naked female and the numbers 666 all ghosted together. The prison guard asked me if it was mine as he found it on the floor just outside of my cell. Had I said yes, It was my trip to Palm Hall and Pelican Bay. This relates to D.J.’s book in a couple of ways. It is evidence of the subculture of guards who cross the line and work for the gangs and/or become one themselves, and it relates to the Green Wall’s Prison Guard gang who used a similar art piece to represent their gang with 666 and the dice.

Also while doing time at Centinella State prison on D yard while I was a shot caller, we had a guard who gave us an inmate’s paperwork that proved that inmate was a notorious child molester with 44 counts of ANNLY/MOLEST. That guard was helping us handle vigilante justice. I wrote about it in my book, ”
The Art of War: A Memoir of Life in Prison with Mafia, Serial Killers and Sex Offenders Who Get Stabbed” This also relates to what D.J. says was going on at Salinas Valley Prison.

Another takeaway: D.J. and I both share a perspective on the root problem with California’s out of control prison system. It stopped being a place of rehabilitation in the 1980’s when the population quickly exploded and rose up to 700%. The Drug War and tough on crime politics turned it into a send everyone to prison deal that made prisons warehouses for violence and gang indoctrination.

As a result of this, prison guards are just as affected by this militant, always violent, racial segregated fight for every piece of space, highly secretive, constant cat and mouse game of violence and “organized hits” that are prison life. Does this sound like rehabilitation? Obviously not. The prison guards are affected by living in this culture and D.J.’s book shows how the two cultures blend together until lines are crossed and blurred. My hat is off to D.J. for standing tall and documenting it.

Glenn Langohr resides in southern California where he spends his time doing what he loves best, reading and writing. He started writing from prison on drug charges and hasn't stopped since. Glenn only writes about GOD'S Word by measuring Scripture with Scripture. He is a Disciple of Jesus/Evangelist/Prophecy Watchman/Author of over 77 books~LOVE IS AN ACTION The author will gift his books FREE from the Kindle store to those who can't afford it... Glenn Langohr rollcallthebook@gmail.com lockdownpubishing.com
View all posts by lockdownpublishing →
This entry was posted in Uncategorized and tagged best prison books, california prisons, crime and punishment, D.J. Vodicka, ex-convict, former prisoner, glenn langohr, police brutality, prion author, prison culture, prison gangs, Prison Writer. Bookmark the permalink.